Breathing life in our songs

Hi, it’s Remco here, writing to you from the Netherlands. I just uploaded the instrumental tracks of two of our songs in Dropbox (hurray!) You already know that we are working from three countries, with Maaike living in the UK and Francis living in the USA. Applications like Skype and Dropbox help us to share and discuss our songs.

Do it the other way around

In many ways, our album comes together in quite an unusual way. Usually, a band starts with recording the rhythm section and end with the vocals or horns. We did the opposite and started with recording the vocals in the USA and UK. As producer Francis said ‘this is a vocal album, so let’s start there’. And right he is!

Breathing life in our songs

So we recorded the vocals over the midi instrument tracks (= the mechanical drums, bass, keys, horns etc. all recorded from a synthesizer) and I brought all that back to the Netherlands. The next thing we recorded there was… right, the horns! Wouter Hakhoff played perfect flugelhorn, trumpet and basstrumpet (wait ’till you hear that one – so cool!), nicely recorded by Jeroen Tenty at the MI5 studio in Hoorn. I have to tell you, to hear well played and well recorded live horns on our songs for the first time, breathing life to those songs, is a fantastic moment. I called Maaike in Liverpool, screaming ‘woooow,  wooohooo’ and ‘you must hear this!’ down the line and she came over to witness the next day of recording horns.

Then it was off to the city of Leiden, where I recorded drums, using a basic kit and focussing on the feel of the rhytm. Engineer Anton is a long time friend and he brought in some fantastic vintage mics to go for that authentic feel good sound we’re after. For Maaike it was hard to not be there, to witness and discuss the recordings. She had to do with my screaming on the phone ‘this sounds great! I could have kept playing that song for hours and hours! wooohooo!)

For some strange reason, we had a lot of bassplayers who offered their services. What luxury! We asked and chose Marcello Briganti, he and I used to play with Anton in a band, a long time ago.  He did a great job, not put off by a weird error in the recording software, probably caused by Maaike who seems to be able to cause weird things to happen, even when she is on the other side of the North Sea. The live bass and live drums give the songs their long awaited feel good groove and authenticity, I think I called Maaike again, screaming ‘wooohoooo’ and ‘yeeehaaa’.

More weird things plus gaffa tape and a bolt

Back to the MI5 studio Hoorn, we finished the Holland recording sessions with a fine recording of grand piano, Fender Rhodes and Hammond organ. Well played by Eric Lensink and recorded by Jeroen and me. Did nothing weird happen? How can that be? Do not worry, ofcourse there was something strange! Listening to the first take, Jeroen noticed a little ‘click’ sometimes during the recording. Investigation led us to one piano hammer (the middle D) that scraped it’s neighbour hammer, causing that ‘click’ sound. We went searching for something small and heavy and ended up with a large bolt and taped that to the hammer. Gaffa tape and a bolt, never leave home without it. So problem solved, in true Mycah style. The MI5 lads immediately called their piano tuner to order 87 of those bolts. 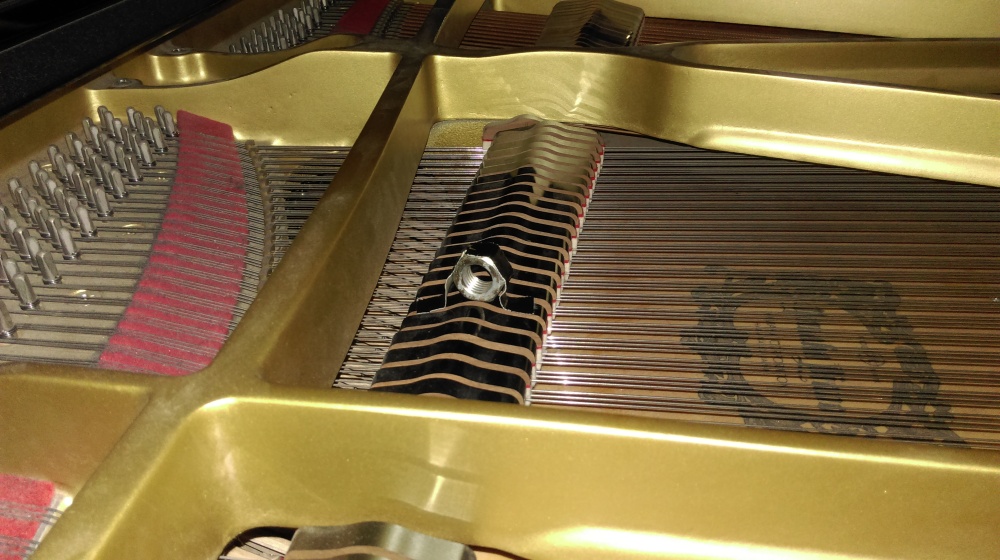 These last days I have been editing the tracks, just a little bit here and there, in my home studio. Now the tracks are in the skilled hands of Francis to make a fine mix and he might have a go at the drums as well!